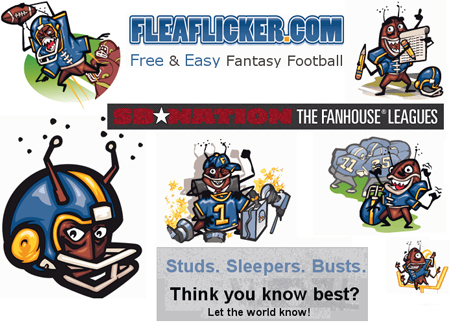 E-Mail me at BucEmBlog@gmail.com if you are interested in joining the Buc 'Em Fantasy Football League/Contest... Ghosthippo, Stixx, Ultimate that means you!!!

Awburn7 had a baby over the off-season, so I’m not sure if he will be able to defend his title. I know you guys are about as disappointed as me. Last season we went with CBS Sportsline as our Fantasy Football Provider. This season … … … We are going to roll with AOL’s Flea Flicker system. I have to be honest, I’ve never used Flea Flicker or strayed away from CBS Sportslines format so this will be new for me and I’m sure this will be new for you.

Also new will be the format in which you are able to participate. Last season I had those interested in the Buc ‘Em Fantasy League just email me out right. This season you have to click here and enter your name, email address, and the league you would like to join: Buc ‘Em. As of right now the league will feature 12 teams. Two of which consist of my own team and the other belongs to Noah Chestnut. Do the math and that leaves 10 open spots!!! So click the link and submit your name, email address, and league quick, fast, and in a hurry in order to be a part of the Buc ‘Em Fantasy Football League.

I havent got the prizes in mind yet for this season, but it could be a fitted Bucs Hat of your choosing, a Bucs License Plate (courtesy of Carroll’s Cove), and of course your mug on the site for an entire year!!! The prizes arent written in stone so if you have any requests, be sure to make your voice heard…. At any rate, be sure to head over to the AOL Flea Flicker Site and attempt to join the Buc ‘Em Fantasy Football League… I’ve yet to set the draft date, but considering Pre-Season begins Saturday, its better to get this thing rolling sooner than later….