Quarterbacks: Jeff Garcia finally started a Pre-Season Game. He played into the 2nd quarter. He threw two interceptions and one touchdown. To sum up Garcia's night, he looked extremely rusty early on. The first interception was more WR Maurice Stovall's fault as he slipped and fell while breaking his route and the Jaguars Reggie Nelson jumped the route and caught Garcia's pass. The 2nd interception was all on Garcia however. After a nice drive down to the 10 yard line, Garcia under threw a pass in the End Zone to WR Michael Clayton that the Jaguars Reggie Nelson again intercepted. Despite those early miscues Garcia did orchestrate a touchdown drive and rebounded well. Having return from a calf injury, Garcia is easily our most mobile QB and with that he will unequivocally be the starting QB regardless of the back-ups performances.

Speaking of back-ups: Brian Griese came in for Garcia. He looked the same as he's looked all Pre-Season. The master of dinking here and dunking there. He did try a 15+ yard pass to Stovall, but he over threw him. Through 3 games Griese has definitely proved he is worthy of the #2 spot behind Garcia. He doesnt get sacked often and protects the football. Luke McCown: He had a 29 yard run and a touchdown pass to Chad Lucas. He looked pretty good on the night, but as usual he got sacked. It's like he takes forever to do the 5 step drop that Garcia skips through flawlessly. With that said McCown is going no where. He will be this teams third string QB. Chris Simms DID NOT PLAY IN THE GAME. He will clearly be cut, possibly Tuesday when the Bucs are expected to make a couple roster cuts. Did the Bucs handle the Simms situation correctly this off-season? Probably not, but Simms screwed himself when he missed the OTA's. Sheesh... Josh Johnson: He DID NOT PLAY either. You could tell Gruden wanted to get a good look at the players he may have to cut and/or retain.

Runningbacks: RB Earnest Graham: man, to me, Graham has just not looked good. The line hasnt given him much either, but his yards per carry is not looking good. I don't know whats up with Mr. August, but he better pick it up in the Regular Season, because the Bucs are loaded at RB. RB Warrick Dunn: Got several opportunities and he really didnt look that much better than Graham. Dunn is a veteran so i'm not the least bit worried about him. RB Michael Bennett: He's got to be the most improved player on the Buccaneers. He looks quick and powerful. He hits the gaps, lowers his head, and keeps his feet moving. Graham might want to look in his rear view, because there's a Bennett Mack-Truck trying to pass him...

Wide Receivers: WR Michael Clayton: He actually had a decent game. He dropped a ball early on, but he did have to extend his body into a traffic to catch the low pass from Garcia. He good Wide Receiver would have caught the ball, but i digress. Clayton as usual made some key blocks in the run game and ended up catching a touchdown pass from Garcia. WR Antonio Bryant: He DID NOT PLAY, apparently he had fluid removed from his sore knees (who knew) and was in street clothes the entire game. He may or may not play Thursday against the Texans. My guess is he will, if anything to test his knees, but he's expected to be okay. It was odd not to see him out there though. WR Dexter Jackson: Dexter had 2 kick returns for 32 yards and one punt return for 13 yards. He didnt have a single Reception again. His lack of offensive touches is really frustrating as he was a WIDE RECEIVER FIRST at Appalachian State and then a RETURN MAN SECOND. Folks talk about his lack of size, but Steve Smith and Chad Johnson are small as well. He should definitely return kickoffs and punts for the Bucs this season no questions asked. We'll see. WR’s Spurlock, Warren, Stovall, Clark, Lucas, and Smith: All of these guys had fairly good games except for Paris Warren. I don't think I saw him on the field once and i know he didnt register any catches. He's surely headed for the scout team. The Bucs have some tough decisions ahead. I would find any way to keep Clifton Smith, the guy is electrifying and finds ways to keep a play moving (spin move, juke move, lower shoulder). The guy is a football player period. Hilliard dropped a ball early and stopped a route that nearly had Garcia picked off for a third time, but he redeemed himself with several nice catches. Maurice Stovall also looked really good tonight, gaining yards after the catch. If only he could do it consistently. I was actually proud of the Wide Receiving Unit in this game.

Tight Ends: Smith, Gilmore, and Stevens each had one catch each. For a team that features a bunch of two wide receiver sets, the Tight Ends really dont get utilized as much as you would expect them too.

Offensive Line: The Offensive Line looked really good. Jeremy Zuttah played the run perfectly and outside of one or two busted plays, he looked really good in pass coverage; even pancaking a defender twice on one play. The depth on the line continues to be a concern, as McCown got sacked and Anthony Davis had two penalties called against him. All in all, they played really well. 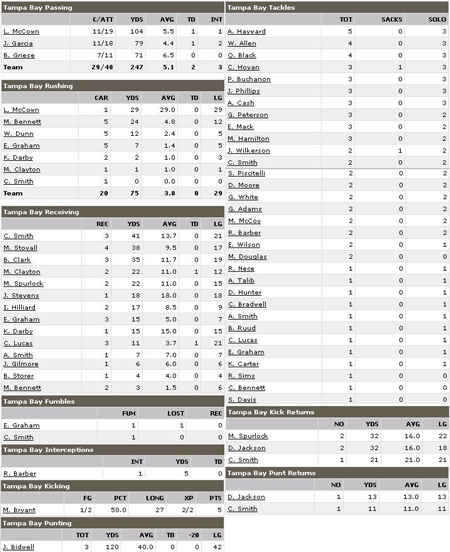 The Buccaneers defense is a true joy to watch. The Jaguars had the two turnovers and you got a sense the game was about to be put out of reach and then Veteran CB Ronde Barber jumps a route and intercepts a pass putting a halt to the Jaguars momentum. Sabby Piscitelli had an INT that was given back due to a penalty on the play. Jimmy Wilkerson continues to impress recording a sack. Gaines Adams was in the backfield on several plays disrupting things which was nice to see. Even Chris Hovan got in the act and contributed a sack. I would say the run defense continues to scare me. J-Ville's Fred Taylor was really running where he wanted to (26 yards on 7 carries). Maurice Jones-Drew sprained his ankle early on, so we didnt get to see how the Bucs handled a scat back. The defense looked great though. The Jaguars got 3 interceptions, a fumble, and a Matt Bryant missed field goal and only won by 6 points. The defense had several 4th down stops and just looked electric out there. The defense is such a staple, if the offense was even half of what the defense has been over the years we would have a dynasty on our hands. Amazing..

Injuries: CB Marcus Hamilton and CB Sammy Davis collided on a play in the 4th quarter. Hamilton limped off the field with busted ribs. Davis wasnt so lucky, he hurt his neck pretty bad and was carted off the field on a stretcher. He has movement in his extremities and is expected to recover, but for a team that has been plagued by injuries; it was a pretty grim scene seeing the entire team surrounding Davis in prayer on the field. Another CB Phillip Buchanon also tweaked his hamstring/groin? I'm not sure what the injury was but he came out of the game early and did not go back in...

For a team that had minimal penalties and turnovers in its first two pre-season games; yesterdays game was bound to happen i guess. If I'm a Jaguars fan I'm not exactly encouraged by the performance I saw. Like I said the Bucs had 4 turnovers and were 11 yards away from winning the ball game. The Bucs play again Thursday against the Houston Texans, but as is customary, I don't expect many regulars to see playing time. Should be interesting to see if Garcia plays at all...