And then there were 12. . . The Buc ‘Em Fantasy Football League brought to you by Flea Flicker via AOL is Officially FULL and READY to go: 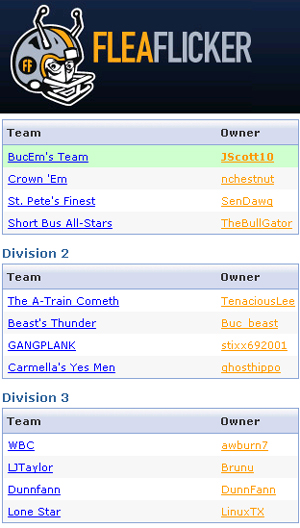 Next up: we need to set up a Draft Time… I’m thinking sometime this Sunday, maybe 6pm Est? Let me know when you guys can attend the Draft. Also, how many seconds-minutes should each player get to make their selection? It works in 30 second intervals, which is a pretty cool option if you ask me… At any rate the league is ready to go. Hopefully we can get the Draft in by the end of next week. Once Saturday’s games are done we should have a good idea of which players are healthy enough to start the season.

For those of you who were left on the outside looking in, I apologize. If I get more requests we can run two leagues and have a Playoff between the two league winners during the, NFL Playoffs. I look forward to the action, Flea Flicker Fantasy Football presented by AOL appears to be a top notch service and I can wait to own this community come September!!! Ghosthippo, I think we face off in Week 1… Yea Boy!