Let me preface this Pre-Season Review of the Patriots-Bucs game by stating I did not see or hear the ball game last night. As hard as I tried, I couldn’t bring myself to listen to Pre-Season Football (as the game wasn’t televised in my area). Here’s what I’ve learned by skimming a couple game logs of the game:

Former Bucs Safety, John Lynch, was just introduced with the New England starting lineup and he received a deafening cheer (as he should), then he was replaced by the true starters prior to game action.

Quarterbacks: Brian Griese: got the start. Continued to do what he has always done; he dinked and dunked his first drive down the field and set up Earnest Graham for a 1 yard touchdown. He will never push Garcia for the starting gig, but he is making a serious case to be this team’s #1 back-up. Luke McCown: Led a long drive that ended with a 1 yard touchdown pass to FB Byron Storer (filled in for B.J. Askew). Looking at McCown’s stat line (6-of-7 for 76 yards, 1 td, 151.5 QB Rating) you would never know he had a fumble in the game and missed his target on a would-be touchdown pass, but did connect with WR Antonio Bryant for a 30 yard gain. He definitely rebounded from Pre-Season Game #1, but he’s very inconsistent, which is disturbing considering the time he’s received along with the looks. Chris Simms: Last week Simms looked great, this week not so much. He had a near fumble, looked out of sync, and had a batted ball at the line of scrimmage. In his defense the line in front of him was very suspect (lack of depth?) and WR Chad Lucas could have caught a ball in the endzone to better Simms case for back-up duties. Gruden should allow Simms to be the primary back-up Saturday against the Jaguars in an effort to see what he can do with the first team offense (should Garcia start, otherwise Simms should start). Josh Johnson: He did get into the game, but from what I could make out, he didn’t get many opportunities to throw the ball… At this point I would go: Garcia, Griese, and Johnson. I realize next season we could be without both Garcia and Griese, but McCown would not be my QB of the future or even a stop-gap at this point. No Way!! (Unless of course you tank the season to secure position to draft QB Tim Tebow! Right)

Runningbacks: RB Earnest Graham: looked a little rusty registering 13 yards on 5 carries. I think health at this point is all that matters, forget Mr. August, Bennett has taken over that role. RB Warrick Dunn: Got several opportunities running and receiving the ball. He looked great; it should be interesting as well as exciting to watch he and Graham this season. RB Michael Bennett: Continued to carry the majority of the load again. He looks super fast and ready to contribute despite having WD and EG ahead of him on the depth chart.

Wide Receivers: WR Michael Clayton: I didn’t hear a single thing about his play all night. Nothing, thats because he didnt register a single catch. Maybe he was a little banged up, who knows... Not looking good though. WR Antonio Bryant: He started in the place of injured WR Joey Galloway. Last week Stovall had done that, so Bryant might be moving up the depth chart. Bryant looked good in week 1 (3 catches) and looked better in week 2 (2 catches). He turned a quick slant into a 33 yard gain; he could push Hilliard for that #2 spot. WR Dexter Jackson: He didnt have a single Reception, returned 1 PUNT, and had 1 rushing attempt. He's gotta be more involved in the offense. Hopefully that groin isnt bothering him too much. WR’s Spurlock, Warren, Stovall: Neither of these guys made much of an appearance. Paris Warren did have a nice catch (as did Stovall), but nothing to warrant regular season game action. On a bright note, Ike Hilliard did look good. To this point, the Receiving Corp has really disappointed me. Not that I thought the same exact guys would be any better, but i thought DJax would bring a new wrinkle to the unit, as well as this being Clayton's contract year... Shameful so far

Offensive Line: The line looked great. The Ravens only mustered 35 rushing yards last week against the Patriots Defense, where the Bucs went well over 100 yards rushing Sunday. You can attribute a lot of that to the Offensive Line opening up lanes for the rushers. If Chris Simms performance is any indication the depth along the offensive line is nothing to get excited about, which is sort of odd considering there’s several guys who have been with the Bucs for a while i.e. Anthony Davis, Dan Buenning, Chris Denman etc. 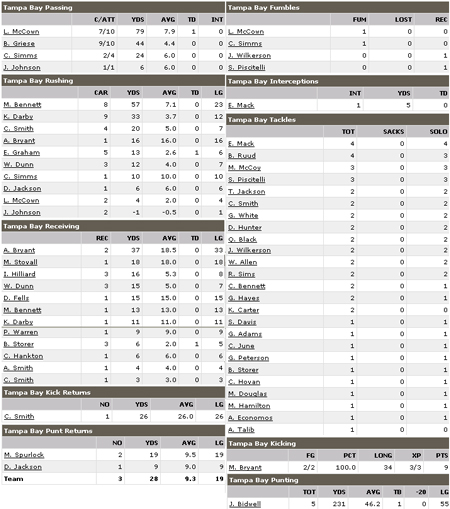 The DLine again faded into the background in terms of registering sacks, I heard they pressured the Quarterback often, but ZERO sacks doesn’t say much. Gaines Adams and Aqib Talib register a tackle each so I’m not sure the starters really got that much playing time. Barrett Ruud continued to be a force causing a Kevin Faulk fumble. Elbert Mack recorded an interception and Sabby Piscitelli picked up a fumble and took it to the house. The defense continues to look good aside from the dline..