Forget the Pre-Season, you can get into Raymond James Stadium even earlier… Just purchase tickets to this years 98 Rockfest. Raymond James Stadium will open its doors to the likes of: Shinedown, Serj Tankian, Theory of a Deadman, Kid Rock, 3 Doors Down, Filter, Ashes Divide, Saving Abel, and Five Finger Death Punch. Tickets are selling at $45.00 a pop! If you can’t wait until preseason to get inside Raymond James Stadium this is your chance, granted it’s not football, but it is a fairly stout group of bands performing… 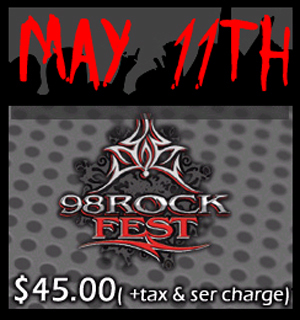 Shinedown's "Beyond the Sun":

You can purchase tickets by clicking here. Okay you may think this was a cheap stab at forcing my music upon you and you could be right. At least I gave you the heads-up you needed to step inside Raymond James Stadium prior to Pre-Season Football... okay I’ll stop… By the way, the concert takes place on Sunday, May the 11th!!