Cadillac set to put the pads on and get to work

Share All sharing options for: Cadillac set to put the pads on and get to work 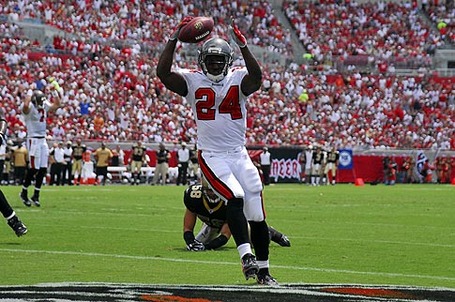 Well, in keeping with what JScott wrote a couple of weeks ago, the Cadillac appears set to roll out of the shop and back onto the practice field in pads, according to the St. Pete Times Bucs Beat.  The team has about a week to decide if Williams will go from the PUP list to the active roster or IR.  With the Bucs on the cusp of the division lead and/or in good position in the Wild Card race and with recent attrition at the running pack position, it might actually be time for the team to roll the dice a little bit and bring the Caddy back to game action.  The severity of Graham's knee injury is unknown, at least to the media at this point.  He is scheduled to be evaulated by team doctors today.  Graham apparently hurt the knee in the first half, but toughed it out for much of the second half before giving way to Clifton Smith in overtime.   Warrick Dunn's status is still undetermined as well, but you can't feel good about an aging RB with back pain being able to last the season.  Although Gruden hasn't come out and said it yet, I think Michael Bennett's major short coming, pass blocking, might be his downfall in Gruden's offensive system.  Clearly Gruden isn't comfortable giving him regular playing time.  No one really knows what Clifton Smith can bring to the table in the running game.  Thus, the time seems right for Caddy to magically come in and save the day.

Quid pro quo... do you really rush a young, talented, but injury prone guy back from a severe knee injury and put him in game action within a week or two after returning to contact practice?  His rehab and physical status has been kept under wraps, so I can't really say how he's running or feeling.  I do know that it's one thing to get resistance from a rubber band in a doorway at home and it's completely another thing to plant your legs in the ground and fight against Jonathan Vilma and Will Smith for extra yardage on 3rd down.  I'd be sick if he came back too soon and aggravated the knee long term.

All said, the Bucs have a very important decision to make: put him on IR and either sign another running back or go with the grab bag of Clifton Smith, Michael Bennett, and whatever veteran back is healthy that week OR activate the Caddy and gradually work him into the RB rotation with the hopes he'll be a full time back by the end of the season.  This will be one that could pay dividends this year or could set the team back in the long run.  With time running out on a decision, we'll see what kind of poker player Gruden is in the coming week.