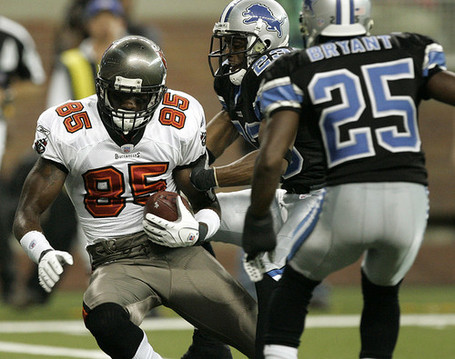 Ok, normally by this time I would've put up my weekly piece reviewing the Bucs' upcoming opponent.  However, when you're playing an 0-10 team, you probably know that they're horrible in most every facet of the game.  Not much need for me to explain the ingredients of that mess.

That said... this game is more about what kind of team the Tampa Bay Buccaneers are.  They haven't played well on the road.  They've played to the level of their competition more often than not.  They've allowed teams to stay in games and have sorely lacked that kill shot that good teams will exhibit from time to time.  They've lacked the big play on offense.  They've played a good first half, but a bad second, and vice versa.

Sorry for the shortness of this post, but there's nothing more to say in my mind.  The Bucs shouldn't just not lose, but they should show they're a high quality team on both sides of the ball and not just a paper tiger that will get their doors blown off in the playoffs.  Today's the day.  No more Chiefs first half debacles.  No more stagnant second halves like the Seattle game.  The opponent is inferior on both sides of the ball and demoralized.  Jump on them early and put your foot on their necks for 60 friggin minutes, Bucs.  It's time for a complete game.