By the skin of their teeth: what to take from the win

Share All sharing options for: By the skin of their teeth: what to take from the win 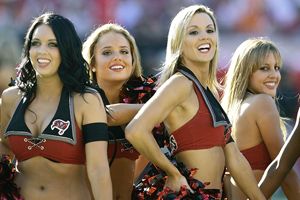 The key word here is "win".  That's all that matters.  The Buccaneers played below their collective ability for much of this game, but managed to find a way to keep the good vibes going into the bye week.  For most of the game, Kansas City completely outplayed the Bucs.  The concern in this game was mainly on the defensive side of the ball.  Kolby Smith ran for 4.6 ypc and a score before leaving with a leg injury.  Jamaal friggin Charles ran for 108 yds on 18 carries.  Mark Bradley, Mr. Non-vertical threat according to me, hooked up with Thigpen on a fly pattern for a 56 yard gain.... and, in reverse, Bradley hit THIGPEN for a 37 yard TD.  I can live with the latter, because everyone can get caught with their pants down on a trick play from time to time.  Getting beat deep by a 3rd string QB to a 3rd option WR in most offenses is a little more troublesome.   Thigpen had time to look left and look right for the open receiver.  Gonzalez found plenty of space in the Tampa Two.  In short, it was an off-week for the defense and they looked quite ordinary against a mediocre offense.  I expect them to bounce back with a strong effort against Minny in 2 weeks.

On offense, Earnest Graham had a stinker of a day.  He lost a 1st qtr fumble and obviously the one in the 4th quarter appeared to seal the deal for KC before the D rose up.  Hopefully he will be able to shake this one off and not let it linger in his mind over the bye week.  You're a blue collar guy and a key part of this club, Ernie.  I think Dunn's absence was bigger than it mightve showed on the field.  He's a seasoned vet who gives you that "je-ni-se-pa", that extra gear and a reliable playmaker who can catch the ball and jitterbug for key first downs on 3rd down where the pass rush is on and the receivers are locked down.  Michael Bennett wasn't able to fill that void today, or at least he wasn't given much of a chance to.  Two touches for a yard.  Clifton Smith obviously had a ginormous KO return for a TD (2nd in team history.... kind of like seeing Haley's Comet!) and had a few key runs on the OT drive, but didn't really get involved in the short passing game either.  No doubt that return turned the tide in the game with the anemic offense doing little.  Antonio Bryant is showing he's got the big play potential to be a reliable go-to guy while Galloway continues to battle injury.

There are some great things to take from this game.  It shows you have the heart and the wherewithall to find ways to win when you're not playing your best football and especially to do it on the road in a loud environment when you've struggled on the road this season.  Talib and Barber had the mental toughness to shake off their 1st half mediocrity and lock up the KC receivers when it mattered down the stretch.  The offensive line kept Hali, Tucker, and McBride out of the pocket for Garcia to scan the field and pick apart the defense.  Adams played through an early injury and got to Thigpen in the second half.  It's time to mend up over the next week and get ready for Minny on Nov. 16.  Also, although it looks kinda futile, let's put our Raider hats on next week for the CAR/OAK game.