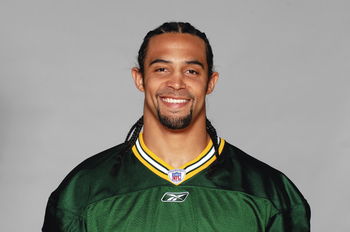 As Bull Gator mentioned earlier, the Bucs signed Noah Herron today to the 53-man roster after making room by sadly placing Earnest Graham and Geno Hayes on IR, ending their seasons.  Herron is listed at 5'11, 218 lbs.  He's played in limited fashion in 23 games over 2 years with Pittsburgh and Green Bay, tallying 273 yards and 3 TDs on the ground and 29 catches for 211 yds and 2 TDs.  He hasn't played since 2006, so I'm curious to see what kind of playing shape he's in, although I'm sure the brass kicked the tires some before bringing him on board.  Clearly, this was an insurance move, with Dunn and Caddy both laboring with injury themselves to differing degrees.

What will Herron bring that the Bucs don't already have?  Well, I'm not sure in the rushing game.   Certainly Dunn will start and Caddy will spell him gradually more each game.  Clifton Smith will see some reps to spell them and Jameel Cook is a serviceable short yardage runner with pretty good hands.  In the end, the Bucs had the roster space and needed a healthy back.  Herron's not listed as that much bigger than Caddy, but should be a good compliment and will probably get his number called some in red zone sets and short yardage siutations.  What sticks out to me about Herron's career numbers is his receiving yardage, which could yield dividends.  With the Bucs' anemic red zone performance, it'll be nice to get someone who can chip block and slip out of the backfield on a delayed route for a score.