Week 11: A Closer Look at the Minnesota Vikings

Share All sharing options for: Week 11: A Closer Look at the Minnesota Vikings 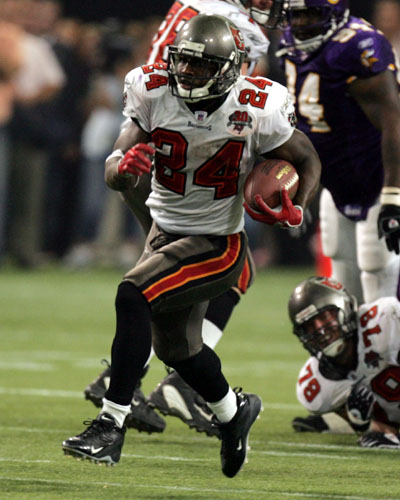 Last game: Minny turned back the Packers 28-27 last Sunday in the Metrodome in a key division matchup behind their fearsome two-headed RB monster.  Adrian Peterson ran hog wild to the tune of 192 yards on 30 carries and the game winning TD.   Chester Taylor led the team in receiving yards with 84 and took a short pass 47 yards to the house.  Mason Crosby missed a potential GW 47-yard FG in the waning moments.

A look at the offense:  To quote Dr. Evil, I'm shaking in my little space boots.  Damn, this team can take your dinner and cram it down your throat.  They are such a tough, physical team currently ranking 5th in the NFL in rushing at 144 ypg.  It all starts up front.  The entire line is solid, but the left side is all-world.  LT Bryant McKinnie keeps QB Gus Frerotte clean and mashes DE's and OLBs in the running game.  He hasn't missed a start since 2003.  LG Steve Hutchinson might be the anchor of the line.  He's gone to 5 consecutive Pro Bowls and has started every game since coming over to the Vikings after starting for the NFC Champion Seahawks in 2005.  He hasn't missed a start since 2002.  What's even scarier than the line is that guy running the ball: AP, AD, or whatever you want to call him.  Adrian Peterson can run inside, outside, over, underneath, through, and around guys.  You get the point.  Even when the line doesn't open up truck sized holes, he can break through first contact and, with his tremendous vision, can figure out where he's gonna go in a split second to get a maximum gain through the secondary.  LT-esque, except bigger.  Wait, do I really need to explain Adrian Peterson?  I think everyone has seen him enough times on highlight reels to know what he can do.  Gulp...

Chester Taylor would start on many other teams in this league.  Think the Rams, Seahawks, Pats, Bengals, or Chiefs might like to have a back like him right now?  Even though he's been a backup for most of his career and is a little small, he showed what he could do in 2006 as a featured back, amassing 1215 yards and 6 TDs.  He also has some jets, ripping off a 95 yard TD run in 2006, the longest run of the season in the whole league.  Since entering the league in 2002, he's averaged a solid 4.4 ypc.

Gus has not been "Frerotten" this year.  Journeyman QB Gus Frerotte has to be a leading candidate for NFL comeback player of the year.  Since taking over for uber-bust Tarvaris Jackson, Frerotte has been good enough to either win or keep his team in games. He's got a meh QB rating of 74.1 and has thrown 11 INTs to 10 TDs this year, but has the majority of those INTs came in 2 games.  Overall, he's been an upgrade over Jackson and has developed a nice rapport with WR Bernard Berrian, who's having a Pro Bowl-calibur season and has given the Vikes a much needed home run threat.  TE Visanthe Shiancoe has come out of nowhere to grab 21 passes for 231 yards and 4 (friggin FOUR!) TDs and must be accounted for on 3rd down and in the red zone.

A look at the defense:

Minny's rush defense is ying to their rush offense's yang.  This unit ranks 3rd in the NFL allowing a paltry 70 ypg.  The Vikes' Williams duo (Kevin and Pat) plug the NT and 7 technique positions in the middle of the 4-3.  These gigantors command double teams and open things up for OLB Chad Greenway and MLB Napoleon Harris to step up in the gaps and make plays.  Incumbent Pro Bowl DE Jared Allen terrorizes QBs from the blindside and collapses pockets.  He's recorded a mind-boggling 8 sacks through 9 games this season.  Penn had better be ready.  I think you'll see plenty of TE help next to Penn tomorrow.  Ray Edwards starts at LDE for Kenechi Udeze, who is out for the season, and has made an impressive 31 tackles.

Good, solid LB help in the front 7 in Greenway and Harris.  E.J. Henderson is out for the season, so Ben Leber has stepped in and played okay, getting about 3 stops a game.  SS Daren Sharper will step up in the box and act like a 4th linebacker at times, giving help to Leber and  the right side of the defense.

The secondary has to be considered a slight bit of a disappointment this year.  Minny gives up 219 ypg in the air, which puts them at 19th in the league, and is near the bottom of the league in INTs with 6.  In short, overall they need to make more big plays.  Shutdown CB Antoine Winfield is doing his part to make plays, with 45 tackles, 2 forced fumbles, 2 sacks, and 2 INTs, both of which were returned for TDs.  I expect them to line him up on Bucs' deep threat Antonio Bryant tomorrow.  If there's a weak spot on defense, it might be at the other corner spot.  CB Cedric Griffin has only recorded 3 PBU and 0 INTs this year.

Last matchup with the Bucs: the Bucs started off their 2005 NFC South title run with a 24-13 win at the Metrodome.  The Bucs' D picked off Culpepper 3 times and Cadillac Williams debuted with 148 yards on the ground.

What will happen: If the Bucs' bye week didn't precede this game or if the game was in Minny, I'd probably go with the Vikes here.  The Bucs will work for a first quarter TD by keeping the Minnesota defense off balance with the short passing game and a healthy helping of Earnest Graham, who won't put up more than 80 yards on the day.  The Bucs potent front 7 will key on Peterson with 7 to 8 in the box on first down, forcing Minnesota into second/third and long situations, where they will key on Minny playmaker Berrian.  Peterson will get between 90 and 100 yards and Minnesota will have a chance late to win, but the Bucs will get to Frerotte and preserve the win.  Tampa Bay 19, Minnesota 16.