Week 9: A Closer Look at the Kansas City Chiefs

Share All sharing options for: Week 9: A Closer Look at the Kansas City Chiefs 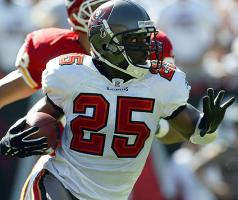 Overview: The Chiefs limp into Saturday's matchup with the Bucs at a paltry 1-6, coming off a last minute 28-24 loss to the fighting Brett Favres in the Meadowlands last week.  Despite the record, the Chiefs have been in the news the past several weeks.  Unfortunately, it's been for all the wrong reasons.  Larry "Grandmama" Johnson has been accused of assault on a female and will be suspended for Sunday's game, his second suspension of the year.  Tony Gonzalez publicly (well, semi-publicly, anyways) expressed his desire to get out of KC and play for a winner before his career ended.  The Chiefs attempted to accomodate him, but reportedly pulled the plug on some potential deals with the Giants and Packers at the last minute, frustrating their star player.  I can't say that I blame the Chiefs for hanging onto Gonzalez.  He's worth more than a 2nd or 3rd rounder, especially if Jerry Jones is setting the bar as high as he did with the Roy Williams theft (as in theft by the Lions).

A look at the offense: With Damon Huard and Brodie Croyle out for the season due to injury, Tyler Thigpen has taken over the reigns at QB.  Last week, Thigpen threw for a robust 25/36 for 280 yards and 2TDS/0INTS.  Pretty solid for a guy making his second career start.  For receiving targets, it all starts with future Hall-of-Famer Tony Gonzalez.  Tony's a tremendously talented and versatile football player.  He's a big, physical blocker, essentially an extra, slightly undersized tackle at the end of the line.  Unfortunately for the Chiefs, due to the sputtering O-line play and generally ineffective passing game, he's had to stay back in pass protection more than the team would like.  When his number is called, he can really get out in space and create serious matchup problems.  He's smart enough to quickly recognize coverage and settle in the soft spots to give his quarterback an underneath/quick release option.  He can also torch LBs and safeties deep down the seam or, like last week, catch a flag pattern and turn it up for a score.  He has to be accounted for on every play.  At one WR spot is second year stud Dwayne Bowe.  The Chiefs drafted Bowe in the 2007 draft and really hit on the pick, as Bowe led all AFC rookie WRs in catches and yards last year.  He's a big target who can go over smaller corners and has the speed to get behind corners.  WR Mark Bradley will start on the other side and is not much of a vertical threat.  Brad Cottam is a decent receiver, but is more of a big bodied blocker.  In short, you can play straight up against this offense without having to cheat over a safety or roll coverage towards Bowe.  Again, Gonzalez must be accounted for on every play.

With Grandmama out, you will see Kolby Smith start the game, with Jamaal Charles spelling him.  Leading the way up front for them will be Branden Albert, Brian Waters, Rudy Niswager, Adrian Jones, and Damian McIntosh.  This crew has allowed 22 sacks so far this year.  No wonder their top 2 QBs are on the mend.  In beating Denver, they rushed for over 200 yards.  In the majority of their losses, they have been held under 100 yards rushing and (gulp) turned to the passing game in a futile attempt to keep up.  Tjhus, you beat this team by jamming the middle and forcing Tyler Thigpen to beat you.  With the Bucs' ability to stop the run with its base front 7, I have no fear that the Bucs will be able to shut down the Chief running game on Sunday.  As well as Gaines has been pressuring the QB, I like the Bucs' ability to frustrate Thigpen and disrupt the passing game as well.

A look at the defense: Wow.  This is a bad unit.  No way to sugarcoat that.  Well, maybe a little bit.  They are starting some youngsters out there.... Glenn Dorsey, Brandon Flowers, Turk McBride, etc.  However, the front 7, outside of Dorsey, is quite forgettable.  They've been quite accomodating for opposing running attacks and are undersized and can be manhandled and taken out of games.  Turk's very undersized for a 4-3 DE, although Hali is a bit of a brute on the other side.  He had 5 stops and a sack last week.    Derrick Johnson is a good player, on pace for about 90-95 tackles, and has two sacks, 2 forced fumbles, and 1 INT, but he can't do it all by himself.  Pat Thomas and Demorrio williams have nary a sack or INT between them and have less tackles than Johnson.  The secondary has been torched, even in victory (396 yds passing by Cutler in 33-16 Den loss).  The Bucs should be able to establish a consistent running attack between the tackles and force the safeties into run support, making play action very effective and giving the White Tiger a chance to get some good looks at single coverage down the field.

What will happen: The Bucs will establish a consistent running attack behind Graham and when Kansas City brings up help, Garcia will hit Warrick Dunn underneath and will find Bryant and Galloway down the field.  The Bucs will come up just short of 30 points, but the defense will give up much less.  The interior line will clog the running lanes, Gaines Adams will put down Thigpen 2 or 3 times and Barber/Buchanon will lock up the WRs. Bucs 27, Chiefs 16.