Week 5: Breaking down the Denver Broncos

Share All sharing options for: Week 5: Breaking down the Denver Broncos 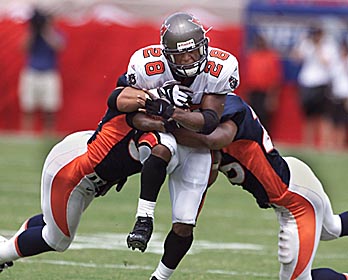 Last game: Dropped a 33-19 stinker to the Kansas City Chiefs at Arrowhead.  Wow.  Sure, Shanahan's waterloo is Arrowhead Stadium, but come on!  The Chiefs?  Ok.  I'll stop now.  Kansas City controlled the ball and TOP behind Larry Johnson's 198 yards on the ground.

A look at the offense:  K.  I'll admit it.  Watching Denver play usually bores the hell out of me, so I haven't really studied them like other teams.  Last year, Shanahan employed a balanced offense (ran 501 times/threw 512 times) with Travis Henry and Selvin Young splitting the carries while Cutler continued to develop in his second year in Shanahan's system.  This year, Travis Henry is gone (and in legal trouble, again... tsk, tsk, tsk) and Selvin Young and Michael Pittman have taken over as Shanahan's "insert-either-at-any-time/frustrate-fantasy-football-owners" tandem of RBs, with Selvin Young the featured back.  In fact, the Broncos can and have lined up both in the backfield, with Pittman at FB, and run the ball.  That's..... a pretty damn versatile backfield, which allows them to swing either or both out for passes, give a quick hitter to Pittman from the FB spot, run a screen for either one, or pound it between the tackles with a lead blocker.   So far, Shanahan has lined up Pittman at tailback in the red zone, with Peyton Hillis lead blocking for him.  The former Razorback is a pretty good runner himself, scoring several times in college, and is a beast of a blocker.

Scared yet?  Well, here's where the fun begins.  So far this year, Denver has been more apt to spread it out in the shotgun and chuck it down the field.  19 completions for 20+ yards.  NINETEEN!  The Bucs have 5.  Bah.  Cutler is on pace for over 5000 yards passing and 36 PaTDs.  Eddie Royal absolutely blew up in Oakland to start the season and his career and has stayed hot.  Brandon Marshall needs no introduction, catching 102 balls a year ago.  He's caught a mind-blowing 31 passes for 398 yds and 4 TDs at the quarter pole of the season.  Tony Scheffler has really established himself as a threat in the passing game, with 194 Rec yds and 2 TDs.  So, we've got two downfield threats to stretch the secondary deep and move the safeties over outside the hash marks to help out the corners, and a tight end that can slip behind the backers and hit the seam and soft spots in the zone.  Yech.  Oh yeah.... that Stokely guy in the slot, you know... the guy with 15 catches so far this year?  Key on the deep routes, and he becomes that pain in the ass that'll catch a short route behind a pass rush or underneath and take off.  Jay Cutler, the puppet master of this show, has the arm strength to hit all the deep outs, posts, flag patterns, and fades/wheel routes down the field quickly.  Want to pressure him, rush him?  Do so at your own risk.  First, he's got a very quick release, making it tough to get to him before the ball's gone and disrupt the pass.  If the ends force him up in the pocket, he's got the speed to tuck it and run.... and with the secondary chasing Marshall/Royal down the field and the backers dealing with Scheffler, Stokely, RBs, Cutler can gash you for some yardage on the ground.  Yikes.

A look at the defense:  So how do you stop the Broncos offense?  Keep them on the sidelines.  Control the ball on the ground.  Denver, for whatever reason, fell in love with ex-Browns D-linemen and picked them up en masse.  Since then, they've been trying to restock the position with able players.  Ekuban is the only one remaining, but the Denver front line has really suffered in the past couple of years.  The Broncos line up in the 4-3 and use an interior rotation up front of first found bust/combine wunderkind/former Jet Dewayne Robertson, offseason delinquent Marcus Thomas, Kenny Peterson, Josh Shaw, and Nic Clemons.  Robertson and Shaw have been ruled out for Sunday's game, but really have been generally ineffective anyways.  None of these guys clog gaps or demand double teams.  Thus, you'll probably see the backers run blitz a little more often than other teams, which makes them vulnerable to play action and medium range passes.

Pass rush?  Not so much.  They totaled 3 against the hapless Raiders in Week 1, but have tallied only 2 since.  First-round pick Elvis Dumervil hasn't produced consistent pressure (but he's only 4 games into his career), and John Engleberger and Ekuban are more run stoppers than pass rushers... at least statistically.  In the middle, WLB DJ Williams leads the team in tackles with 34.  He's aggressive in run support, but isn't spectacular in coverage, with 2 career INTs since his 2004 rookie season.  Boss Bailey and former Buc Nate Webster patrol the strongside and middle and are solid against the run, but, like Williams, are generally unproductive rushing the QB and in pass defense.  Champ Bailey and Dre Bly are shutdown corners with tremendous speed.  Bailey is more physical than Bly and can jam and frustrate a receiver at the line and completely shut down one half of the field. Marquand Manual is more of a tackler than a cover guy, where Marlon McRee picks up the slack a bit more at FS (16 career INTs).

Last matchup with the Bucs: Jake the Snake Plummer led the Broncos to a 16-13 win over the Bucs on Oct. 3, 2004 in John Lynch's emotional return to Raymond James stadium.

Prediction:  This is the kind of team that scares the jeebers out of me.  They are long and strong at the skill positions and can really attack a secondary.  Cutler's arm + Marshall's size and ability = scorched CBs.  The most glaring problem with the Bucs' D?  Well.... a scorched secondary a tad bit too often.  If Adams and White can meet at the quarterback more than a couple of times and force some errant throws or turnovers, the Bucs will have a chance to slow Denver down.  If the Bucs can run the ball and Griese can "drive the bus" with a controlled short passing game, the Bucs have a shot to win.  Bailey and Bly are one of the best CB duos in the league and can jam the WRs and make things tough for Griese. That said... I think the Bucs can run between the tackles on that front 7 and will keep Cutler and Co off the field long enough to keep the score in the 20s.  Bucs 24, Denver 20.