A CLOSER LOOK AT THE DALLAS COWBOYS

Share All sharing options for: A CLOSER LOOK AT THE DALLAS COWBOYS 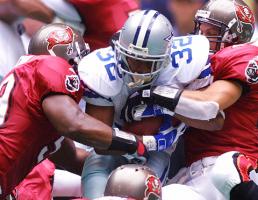 Overview: the Cowboys, pretty much everyone's early season media darling to reach the Super Bowl, limps into this game in 3rd place in the NFC East at 4-3, losers of 3 of their last 4 games.  Two weeks ago, Tony Romo broke his pinkie in overtime against the Cardinals and his importance to the offense showed last week, with Brad Johnson being largely ineffective (to be kind) after the first drive against the Rams and the Cowboys falling on their collective face 34-7.  The Rams ran and threw at will on offense and harassed Brad Johnson on defense all game.  New overpriced toy Roy Williams didn't get squat.  Despite the fall from grace, Jerry Jones insists that Wade Phillips job is not in trouble, but IMO, how can it not be?  You can't seriously tell me that Phillips has gotten the most out of this team.  Due to the continued free fall of the defense sans Pac Man Jones and Terence Newman (especially the secondary) and ineffective, predictiable defensive sets, head coach Wade Phillips is rumored to be taking over calling defensive plays this week from defensive coordinator Brian Stewart (although the nice softy is referring to it as giving some "help").  Tony Romo is inactive for this game and will be inactive until at least Week 11.

A look at the offense:  When on and healthy, they are one of the best and most balanced offenses you'll see in the league.  TO is TO, no need to go into details there.  Unless you've got a tremendous cover corner that can stick with him in man coverage, you've got to roll coverage his way or you're toast.  Now, with the Cowboys acquiring Roy Williams, rolling coverage towards TO will set up Williams for big plays down the field.  Witten is the best receiving, best catch/block combo TE in all of football and has been Tony Romo's favorite target.  With Williams at the 2 spot, Crayton slides into the slot, where he is naturally suited.  He's shorter and a nice route runner, so that should fit his forte.  Marion the Barbarian has earned a reputation as a hard runner who almost never goes down at first contact.   So far this season he's averaged a healthy 5 yards per carry punishing LBs between the tackles (yes, punishing LBs, not vice versa.  The guy actually likes to dish out hits.).  1st round pick Felix Jones has provided the Cowboys with the home run threat they've previously lacked on the ground with Julius Jones and Barber, breaking off long TD runs against the Bengals, Browns, and Packers so far this year.  However, when a team is able to hold Barber and the running game down for a quarter, the Cowboys inexplicably bail on the running game and balanced offense and go to a pass-heavy offensive scheme.  Normally, when Dallas splits out 3 or 4 wide with Romo, they'll throw it deep down field and stretch defenses.  When opposing teams lock up a safety and corner on TO, Romo loves to hit Witten down the seam for 20-30 yards.  With Roy Williams and TO both demanding safety help outside the hash on each half of the field, Witten should find even more room to work with once Romo comes back.  Scary stuff.  For now though, Brad Johnson must find someone he can develop a rapport with, or we'll see the Rams performance 2.0 often.  Speaking of the Rams game again, the mammoth Dallas O-line has played like the Bengals' for the past several weeks, getting dominated by the Cardinals' tiny front 4 and harassed by the Rams last week.  They must find some toughness and play like the behemoths they are to open holes in the running game and keep the statuesque Johnson upright.

A look at the defense: Parcells implemented the 3-4 upon taking over the reigns in 2003, and drafted players like DeMarcus Ware, Marcus Spears, Chris Canty, and Anthony Spencer.  Wade Phillips is considered the guru of the 3-4 and the Dallas defense thrives on creating confusing looks up front, jamming the middle, and getting to the QB.  With a secondary as weak as Dallas', pressure is a must, and Greg Ellis, Spencer, and Ware bring pressure off the end well.  Zach Thomas and Bradie James patrol the middle and love to lay the wood to opposing FB/RBs.  Both are pretty adept in the middle in zone coverage and can stay with your average tight ends in man.  Dallas started the season with an adequate CB tandem on paper of Pac Man and Terence Newman, but Newman has been out most of the year with a nagging hammy and Pac Man is in rehab.  (The other) Roy Williams reappeared for the Rams game, got burned, broke his arm, and is out again.  Anthony Henry is limited in his ability to stay with WRs in man coverage and Mike Jenkins is as green as the USF Bulls jersey he wore last year.  He's been pretty good in man coverage this year, but can he put it together for a whole season?  Ken Hamlin's a solid safety in coverage, but is a little soft against the run.  Keith Davis is a good all around player, but could stand to provide a bit more of a presence in run support as well.

Prediction:  Sigh.... I always predict based on instinct, and something doesn't feel right to me about this game.  Dallas is desperate and returning home after some royal butt kickings with alot to prove.  If you're gonna beat the Cowboys, you've got to be able to hit the long ball, and that's something the Bucs don't have much of (although I really like Bryant as the #2 beside a healthy Galloway the rest of the season).  Galloway is expected to play, but I don't think he'll be effective enough to make much of a difference.  Dallas hits a few big plays to Witten and Owens, keeps Graham and Co in check, and limits the big plays down the field for once.  Cowboys 24, Bucs 20.