A Closer Look at the Seattle Seahawks

Share All sharing options for: A Closer Look at the Seattle Seahawks 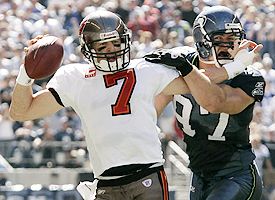 Welp, I'm going to my first game this year at the Ray Jay tonight and coming off consecutive hangovers induced by the Rays late series collapse, but hey.... let's take a look at the Seahawks.

On offense: It's no secret that Holmgren likes to throw and throw often.  When healthy, Hasselbeck gives the Seahawks a vertical passing game, and they'll pretty much throw out of any set.  With a healthy Nate Burleson, Koren Robinson, Deion Branch, and Bobby Engram, they can really spread the field and give defenses a fit.  However..... their entire WR corps has pretty much been decimated by injury, so it looks like you'll be seeing Koren Robinson and Keary Colbert, with a chance for Deion Branch to play as well.  Not too scary.  Top draft pick John Carlson has been a huge asset for Seattle so far, catching 16 balls for 190 yds and a score.  He really gives them a chance to exploit the seam and the middle of the field and create matchup problems.  Seneca Wallace will be starting tonight in place of Hasselbeck and is, heh, well, a pretty sad option.  In 2 games this year, he's had a passer rating of 57.6.  He's not Michael Vick fast and he doesn't have a great arm, so he's fodder for any front 7 not named Detroit.  Julius Jones is 2 yards and trip and fall.  He sucked in Dallas and he sucks in Seattle.  Don't you need to be at least a decent player before you talk junk to a solid defensive team like the Bucs?

On defense: Well, they're a pretty crappy fantasy option, so that should tell you what you need to know!  Just kidding (about the what you need to know part... they are a horrid fantasy option).  Seriously, on paper, they're a pretty good bunch and they have some core guys remaining from a pretty good defensive football team the past few years.  Kerney's a productive end.   Tatutpu can go sideline to sideline and hits hard.  Julian Peterson's more of a 3-4 OLB/4-3 DE, but they've got him playing OLB in Seattle's 4-3.  Interesting.  He has an impressive 5 sacks through 3 games so far, so I guess it's working out.  Jennings and Trufant are a nice set of corners, but they've been asked to do too much in run support, as the Front 7 is getting pushed around and gashed in the running game.  The D just hasn't created consistent pressure and forced the turnovers they've been used to forcing over the past few years.

Last matchup w/Bucs: Bucs dropped a 20-6 offensive stinker in the Pacific Northwest to start the 2007 season.